The Viking Ships at Lofotr

The Vikings were skilled seafarers. They sailed long distances for trading purposes. During the Viking Age, better boats were built than ever before, and the Vikings could navigate with considerable accuracy. Thus it was much easier to travel.

They crossed the Atlantic to Iceland, Greenland, and Vinland. To the east, they travelled via Russian rivers to the Caspian Sea and via the Black Sea to Constantinople (Byzantium). Finds indicate that the Vikings of Borg also travelled far and wide, both on trading expeditions and perhaps also on other types of mission. The Vikings had coveted wares to trade, a fact that you can learn more about by visiting the museum’s archaeological exhibitions.

We have two different Viking ships at the museum, in addition to a number of smaller vessels.

A full-scale replica of the Gokstad Ship (from the 800s) was planned as part of the 'Viking Museum of Borg' project. The ship was named “Lofotr” and was completed and launched in the spring of 1992.

A variety of different assessments lie behind the practical solutions chosen for the ship. This led to the Lofotr having a hull made from pine instead of oak. As with the Gokstad Ship, Lofotr is a very seaworthy vessel and has won several regattas. Lofotr has sunk once, in 1994 at Sommarøy in Troms. A possible cause for the accident is the difference between the iron used in today’s nails and that used by the Vikings. The bog iron used in the Viking age was more pliable and resistant to rust. Lofotr was salvaged and repaired and is used by the museum on a regular basis for a variety of tasks. 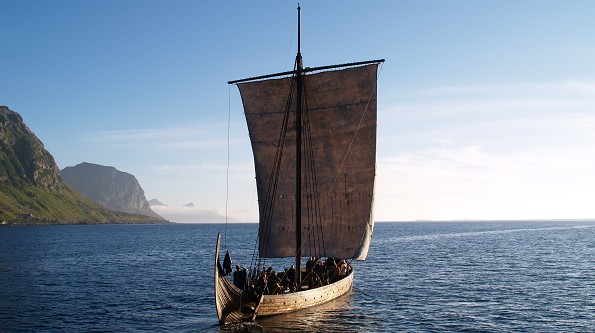 In 2006, the museum purchased a Polish replica of the Gokstad Ship. The ship was built in 2000 and is 65% of the size of the original Gokstad Ship. It had been called the “Jomsborg”, but was given a new name when it arrived in Lofoten. Vargfotr is colourfully embellished and is an impressive sight when under sail or being rowed.

Three smaller boats dating back to about 850 A.D. were found alongside the Gokstad Ship. The femkeipingen is the biggest of these smaller vessels and is about 10 metres long. The word femkeiping means that the boat is fitted with 5 pairs of oarlocks (keiper). The femkeipingen is moored at the Viking Ship Harbour.

The two færings (four-oared boats) are eight and 6,5 metres long. These were lighter boats used together with the Gokstad ship. Based on the concept of “after boats” mentioned in the sagas, these were probably on tow behind the main ship. When the boats were discovered, they had been chopped to pieces and it took the archaeologists a long time to put all the parts of the small boat and the larger one together again.

A project involving the building of a femkeiping for use at Borg was initiated in January 2002. The boat was built at full-scale, and oak was used as with the original. Considerable craftsmanship is required to make such a replica, given the vessel’s broad strakes which can be as little as 12 mm thick. Other replicas have shown that these boats can be rowed very quickly, and this was our experience, too. The boat is also suitable for sailing when rigged with a simple square sail.

The project was led by local boat-builder Frik Harald Bjerkli.

Horse riding (for children) (Not available in 2020)

Sail or Row a Viking Ship

The Viking Ships at Lofotr