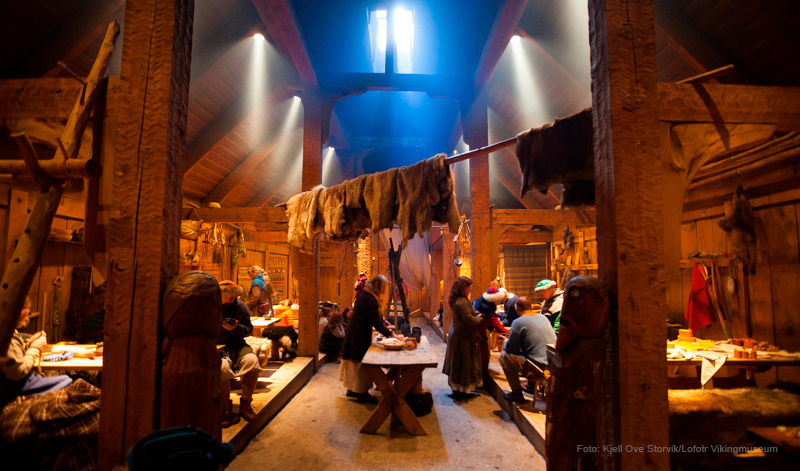 The longest Viking Age longhouse has been found and excavated at Borg in the Lofoten Islands. A rich and powerful dynasty of chieftains ruled here during the Viking Age. A full-scale reconstruction of the longhouse and the authentic surrounding environment have been built up. Come on in – take in the smell of tar and an open fire, admire the handicrafts, embellishments, and architecture. Join us on a journey over a thousand years back in time.

For over 1000 years the wealthy chieftain’s seat at Borg lay hidden and forgotten. When a farmer began to plough his fields in 1981, beautiful fragments of glass and rare ceramics were revealed in the furrows behind the tractor. This was the beginning of an archaeological sensation. Not only was the world’s biggest longhouse uncovered and excavated, the unique finds also bore witness to the fact that a mighty chieftain had lived here, a chieftain who enjoyed extensive contact with other seats of power in Europe.

Today’s Chieftain’s House is a full-scale replica, measuring an impressive 83 metres in length and 12 metres in width. It is important for us to create an authentic and vibrant atmosphere. You will be met by the smell of tar and an open fire as you cross the threshold. Flickering light from the oil lamps illuminates beautiful handicrafts, embellishments and the architecture of the Chieftain’s House. Viking feasts and other meals are an experience in their own right, tasty fare served in a unique setting. The Vikings will also be happy to entertain you with stories, songs, and music.

The archaeological exhibitions with their unique finds are close by. Here you can study gold foil amulets (gullgubber), fragments of pottery, jewellery, swords and other impressive finds from Borg and the surrounding areas. With the help of short films, archaeologists explain the finds and the significance of Lofotr in a broader context. In our cinema, the film “The Dream of Borg” is screened.

The Chieftain’s House is set in spacious grounds. In summer you can help sail the Viking ship, shoot a bow and arrow and learn a number of other important Viking skills. Ancient animal species graze in the spacious grounds.

Familiarise yourself with an important part of Lofoten’s cultural heritage – The Viking Age at Borg and Lofotr’s unique position, both national and international, for over 1000 years.

During the Late Iron Age (550-1030 AD), Borg had already been an important centre for hundreds of years. The oldest version of the Chieftain’s House was built in the 500s, and even at such an early date, it was an integral part of the area’s continuous development as a centre of social and religious power.

Cooking pits from the Early Iron Age indicate that this was once a gathering place, most likely for religious feasts where people would congregate and eat together. The remnants of a circular group of buildings at Bøstad also date back to the Early Iron Age. This kind of site is usually interpreted as the remains of a warrior camp and is associated with centres of power.

In the area surrounding Borgøyden heights, there are many fascinating archaeological remains. These help support the theory that Borg was the seat of a chieftain during the Iron Age.

Down by Innerpollen bay, there is a large collection of the remnants of Iron Age boathouses, and in nearby Bøstad there are burial grounds and one of the most distinctive circular groups of Early Iron Age buildings in North Norway.